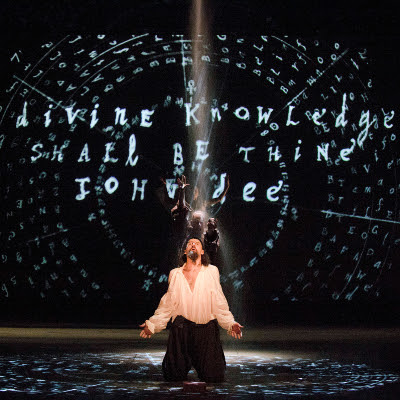 "Well that was bizarre …" as we made our way out onto St Martin's Lane. Couldn't argue.
This "English Opera" from Albarn and Norris, first seen in Manchester last year, has just ended its modest, not well-attended, run at the Coliseum.

As a piece of music theatre, I felt  it succeeded better with the spectacle and the stagecraft than it did with the score. Albarn himself plays a kind of troubadour narrator, and his band – period instruments very much in evidence – is on a stage platform lift. And in the pit, the orchestra with Stephen Higgins. The music is generally easy on the ear, without being memorable or particular apposite. Sometimes, we get a lively repetitive rhythm going – Nothing Is Unlawful – which could almost be Philip Glass. And there is some fine singing – though everyone seems to be amplified – notably from Steven Page's Walsingham and Christopher Robson as the charlatan scryer Kelley. But much of the text is inaudible, and without surtitles, the subtleties of the story largely passed me by. And I'm afraid that, for me, Albarn's voice tends to drag the mystical down to the mundane.

But the spectacle is often memorable – animated projections of geometry and astrology, not unlike Prospero's Books, the masque of the Virgin Queen, the column of sand pouring onto Paul Hilton's dark, sinister Dee at the end of Act One, the ravens who fly down onto the stage at the beginning and the end, the Horrible Histories procession prologue, and especially the books – the young Dee discovers his thirst for knowledge early, and the pages move around ceaselessly, for scene changes and more projection, and leaves flutter down to carpet the stage. All beautifully done. But very bizarre.