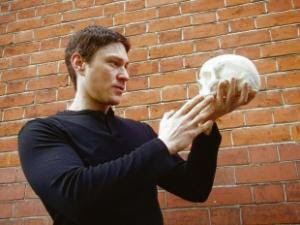 HAMLET
Brentwood Shakespeare Company at the Brentwood Theatre
15.04.11
A clearly delivered, tightly plotted Hamlet from Brentwood Shakespeare, with Lionel Bishop's almost aggressively brooding Prince at its centre. The clouds still hung over him; only his livelier mania after the interval brought relief from resentful sorrow. But it was a beautifully spoken, thoughtful interpretation – like Alan Ablewhite's prolix Polonius, he made effective use of asides to draw us into the intrigue.
A strong cast brought a wealth of experience to their roles. Sydney Hill's Claudius could easily have walked in from one of Wolfit's tours: a rich, old-school interpretation. By contrast, Beth Smith's earnest blue-stocking Ophelia was moving in her madness, all mud and feathers. The Gravediggers, who survived the cuts better than most, were brilliantly done by Ablewhite [again] and the inimitable Brian Terry. Rosencrantz worked surprisingly well as a woman, thanks to Hayley Joanne Bacon's feisty performance. And Alec Clements' apprentice Osric was very promising.
The staging was confident and dramatically meaningful from the first revelation of the red hangings to the final 'resurrection'. I was less sure about the colour-coded “timeless” costumes – to me they smacked of 1950s science fiction.
But Glenda Abbott's polished, fast-paced production successfully brought Shakespeare's finest tragedy to vivid life, pleasing both Bardolators and beginners.
on Monday, April 18, 2011