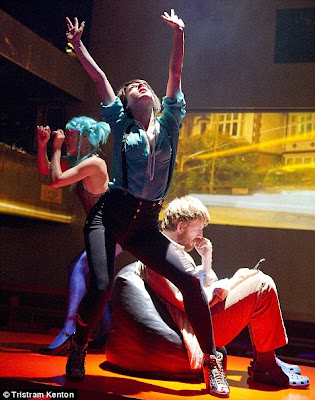 EARTHQUAKES IN LONDON
National Theatre at the Cottesloe
21.08.10

I escape the V Festival in Chelmsford by going clubbing in the Cottesloe. The National's poor relation has undergone a transformation, in Miriam Buether’s radical design, into a trendy bar, with stools and a standing area for the braver punters. There are videos all around the walls, and two strange widescreen letter box stages halfway up the end walls.
The occasion is Mike Bartlett's new piece – twice as long as his previous shows, and ambitious in its intellectual and emotional scope. More does not necessarily mean better, and I wonder how essential the production numbers are. But the playwright explicitly encourages the director, Rupert [Enron] Goold - this is a co-production with Headlong – to throw everything at the piece. So we have a burlesque strip show, sinister mums with Silver Cross prams, clubbers and lowlife crowding the S-shaped catwalk which snakes the length of the auditorium.
This is theatre for people who like their eclectic playlist on shuffle. Me, I prefer standard sonata form, but I could not help being swept along by the excesses of the production, and of course by the narrative as it unfolded.
Three sisters are disowned by their climate scientist father, who thinks it would have been better had they never been born. Watching their lives unravel, you had to sympathise with his view. The youngest, excellently if uncomfortably played by Jessica Raine, is a wild child, permanently, confrontationally unhappy – memorably, she seduces her own brother-in-law, an impressive Tom Goodman-Hill. Freya [Anna Madely] is pregnant, but desperately unsure whether she can bring a child into this doomed world. The elder sister [a strong, cold Lia Williams] is a Lib Dem minister in the coalition government. Her portfolio is the environment, and like her father she is tempted by the corporate dollar.
The whole seventeen-strong company is excellent – Maggie Service has some lovely cameos as a dismissed employee, a saleswoman in an unrecognisable Liberty, and, touchingly, a war widow nostalgic for a vanished world. Bill Paterson is the curmudgeonly paterfamilias, preaching Armaggedon as he watches the wildlife and waits for Gaia to redress the global balance.
The “Matter of Life and Death” finale sits strangely with the visceral energy of the rest, but there's no doubting the power of the piece, and its timely message.
on Sunday, August 22, 2010