THE WICKED WITCHES OF OZ 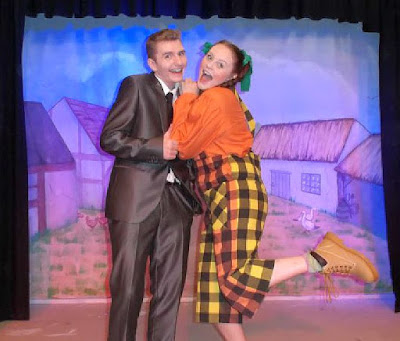 THE WICKED WITCHES OF OZ
Little Waltham Drama Group
in the Memorial Hall
17.01.16

How to keep the village panto fresh and entertaining for everyone ?
This is one good idea: a new script with an ingenious twist on a familiar tale, and a keen young director to bring it to life.
“I don't think we're in Waltham any more ...” Dorothy [Karen Allen] and her unlikely farm hands, not to mention Toto the pantomime dog, are transported to the Emerald City in search of brain, heart and wardrobe.
A lot of fun on the way: Axe Factor, Witch Factor and a sprinkling of local jokes. Music too: Showbiz, Les Mis, The Wiz. Blues Brothers, Fats Domino and much more, though not the ring-fenced Rainbow, represented only by some cheeky snatches of pastiche.
Excellent panto performances from Jenny Broadway as Aunt Em and the first witch, Momby, Viv Abrey cackling away as the green and warty Edna, Mike Lee as a bearded Wizard and Ken Little as a frisky Toto, though he would have benefited from another seasoned ad-libber to spark off. Nice character work from Kate Farrell as Munchy from Down Under, Ryan Chapman as the front-loader Tin Man, Ash Cobden as Aslan, Alex Lee as a likeable Scarecrow and Tash Wootten as side-kick Drip. Colourful chorus numbers from the Maids with neon hair, the Munchkins and the Crows in their boaters and giant specs, led by the brooding presence of Martin Final's King Crow.
Children of all ages in Aunt Em's garden had a great time joining in the mercifully short community singing, and enjoyed the fruity chews from the sweetie baskets in the traditional Waltham walk-about.
The Wicked Witches of Oz, penned by Peter Nuttall, is directed by Stuart Goodchild assisted by Jo Lee, with choreography by Kim Travell and musical direction by Chrissy Gould.